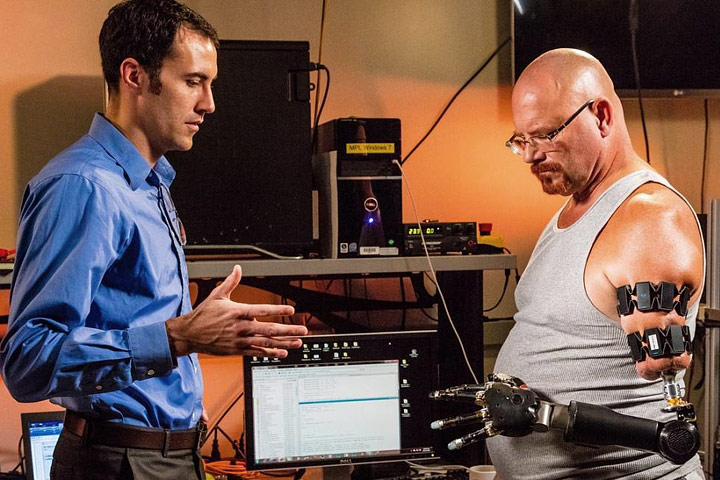 A pioneering surgical technique has allowed an amputee to attach the Modular Prosthetic Limb developed by the Johns Hopkins University Applied Physics Laboratory (APL) directly to his residual limb, enabling a greater range of motion and comfort than previously possible. This is a first for the field of prosthetics, said Michael McLoughlin, chief engineer in APL’s Research and Exploratory Development Department.

“This accomplishment has eliminated one of the biggest gaps in prosthetic development: the socket,” said McLoughlin.

The socket — the part of the prosthesis that attaches to the body — is the most critical component of a prosthesis. If it doesn’t fit correctly, the patient can experience pain, sores and blisters, and the prosthesis will feel heavy and cumbersome, said APL’s Courtney Moran, a clinical prosthetist who works closely with patients. Even with well-designed sockets, patients have reported problems with heat, sweating and chafing, Moran said.


“The sling does get a little uncomfortable after working with the MPL for a while,” said Johnny Matheny, one of several patients who have worked with the MPL over the years to help scientists, engineers and physicians fine-tune its capabilities and test its usability. Matheny, whose left arm was amputated in 2008 because of cancer, is considered a pioneer of advanced arm prosthetics. He was the first patient at the Johns Hopkins Hospital to undergo targeted muscle reinnervation (TMR), a surgical procedure that reassigns nerves that once controlled the arm or hand, which can make it possible for upper-extremity amputees to better use and control an advanced prosthetic device. In addition to the MPL, he has also test-driven some of the most advanced, state-of-the-art prosthetic arms in the world.

When introduced to the idea of undergoing a surgery that would allow him to mount the prosthetic arm directly to his residual limb, he jumped at the chance. The procedure is called osseointegration. In the first stage of the procedure, a custom-made compressive device — called Compress® — was implanted into the marrow space of the bone of the residual limb. This bone-anchoring device induced a biological response from the bone to create a strong, long-lasting connection between the implant and the bone. In other words, the implant became a part of the bone. In the second stage, which took place several weeks later, an adapter brought through the skin was connected to the Compress implant on the bone side, enabling a direct connection to the external prosthesis. Richard McGough, chief of the Division of Musculoskeletal Oncology at the University of Pittsburgh Medical Center, performed the stage one surgery on Matheny in March 2015 and stage two in June 2015, making Matheny the first patient in the United States to receive the TMR and osseointegration. Four months later, Matheny traveled to APL and attached the MPL directly to his body for the first time.

“Boom!” Matheny said, when asked to describe the almost immediate transformation in his ability to control the MPL. “Before, the only way I could put the prosthetic on was by this harness with suction and straps; but now, with osseointegration, the implant does away with all that. It’s all natural now. Nothing is holding me down. Before, I had limited range; I couldn’t reach over my head and behind my back. Now boom, that limitation is gone.”

Over the course of three days, Matheny went through a series of exercises in APL’s prosthetics laboratory to determine the limits of his newfound control and range of motion. “What he’s been able to do without that socket interface has been unbelievable,” said Moran.

Moran and the team were planning to take it slow and easy, she said. “We were conservative in our expectations,” she explained, “because we wanted to be cautious about how much load we were putting on the implant, how much we were asking him to do and make sure that we had a number of safety considerations in place and somewhat temper expectations for him.” However, Matheny had done his research and was more than prepared, she said. “He had configured a weighted attachment for the implant that was about three pounds, and he had been doing exercises on his own with this weighted implant, which really put us at a position to do more right from the get go.”

“What ultimately happened was that Johnny met all of my planned goals within two hours of arriving,” she said.

So for the rest of the visit, they just threw more challenges at him. He was able to demonstrate individual finger control, simultaneous finger control, two degrees of freedom at the wrist, multiple grasps, and worked through simulated activities of daily living.

Matheny’s achievement “moves the whole field forward, and not just a small step,” said McLoughlin. “I mean, it is a really big jump in it. The challenge for us next is to really figure out how to get this technology out of the laboratory and into the hands of people who need it. For all the incredible things that we see Johnny doing with the MPL, when we’re finished here in the lab he has to leave it here and go home. We really want to enable him to leave with that arm and to use it every day. And that’s what Johnny wants too.”

“That’s the great thing about APL,” he continued. “We don’t stop at the laboratory. We show things work on the bench as a way of getting them into the field. And it’s no different in this instance. Unless that technology gets in the hands of the injured warfighter, the elderly person who’s having trouble living independently, unless that happens, we haven’t really fulfilled our mission.”