Solar Road in the Netherlands 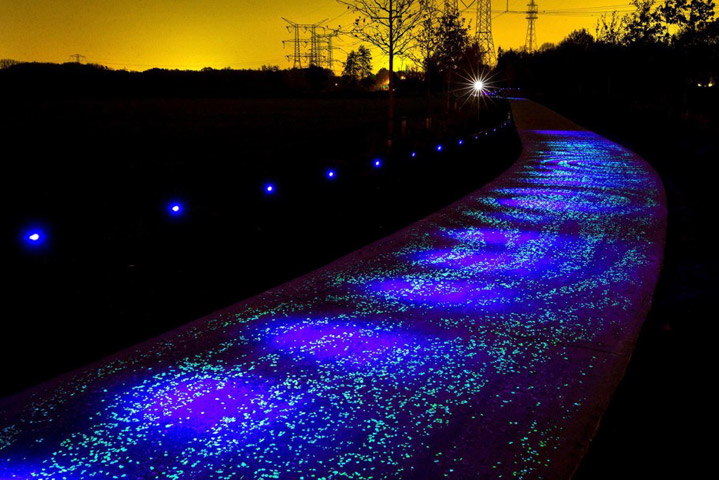 The Netherlands made headlines last year when it built the world’s first solar road – an energy-harvesting bike path paved with glass-coated solar panels.

Now, six months into the trial, engineers say the system is working even better than expected, with the 70-meter test bike path generating 3,000 kWh, or enough electricity to power a small household for a year.


“If we translate this to an annual yield, we expect more than the 70kwh per square meter per year,” Sten de Wit, spokesman for SolaRoad, the group behind the project, told Tarek Bazley at Al Jazeera. So just imagine the potential if we covered all our roads in the stuff. It’s this kind of thinking that got the Internet so hyped-up over Solar Roadways last year – a crowd-funded project that aimed to power the entire US with solar-covered roads. However, the Netherlands became the first country to put the idea into practice with their installation in Krommenie, a town north of Amsterdam.

The solar panels used on the Dutch bike path are sandwiched between glass, silicon rubber and concrete, and are strong enough to support 12-tonne fire trucks without any damage. Each individual panel connects to smart meters, which optimize their output and feed their electricity straight into street lighting, or the grid. The engineers spent five years creating the system to be durable. “If one panel is broken or in shadow or dirt, it will only switch off that PV panel,” said Jan-Hendrik Kremer, Renewable Energy Systems consultant at technology company Imtech.

More than 150,000 cyclists rode over the solar panels during the trial, and so far they’ve only noticed one fault – a small section of a coating, which provided grip to the surface, has become delaminated due to temperature fluctuations. The team at SolaRoad is now working to improve this coating. “We made a set of coatings, which are robust enough to deal with the traffic loads but also give traction to the vehicles passing by,” Stan Klerks, a scientist at Dutch research group TNO – the parent company, which came up with SolaRoad – told Bazley from Al Jazeera.


The researchers design the panels to not only let in as much light as possible, but also to last at least 20 years – a similar lifespan to rooftop solar panels.