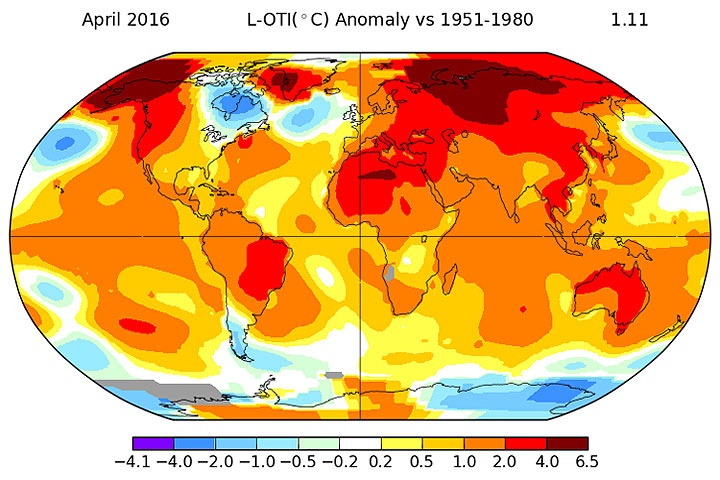 April was the warmest such month on record for the globe, and yet again, we saw a near-record large margin compared to average, according to NASA data released Saturday.

The record all but assures that 2016 will set another milestone for the warmest calendar year in NASA’s database, regardless of whether the rest of this year sees comparatively cooler global temperatures. During each of the past seven months, global average surface temperatures have exceeded the 20th century average by more than 1 degree Celsius, or 1.8 degrees Fahrenheit. Until October, that 1-degree threshold had not been crossed since NASA’s global temperature records began in 1880.

This is particularly relevant since the Paris Agreement on climate change specifies that countries should work to keep human-caused global warming to under 2 degrees Celsius, or 3.6 degrees Fahrenheit, above preindustrial levels by the year 2100.


In addition, the agreement contains language referring to the need to limit global warming to as low as 1.5 degrees Celsius, or 2.7 degrees Fahrenheit, above the preindustrial average. The temperature records that have toppled during the past year have shown just how close we already are to these climate guardrails.

If global warming shoots past the 2-degree target, experts fear a runaway cascade of dire consequences, from a sharp increase in sea level due to the melting of the Greenland ice sheet and loss of much of West Antarctica to the mass extinction of climate-sensitive species.

According to NASA, April had a temperature anomaly of 1.11 degrees Celsius, or 1.99 degrees Fahrenheit, above the 20th century average, which means the month tied with January for the third-most unusually mild month ever recorded. The top two spots on that list are occupied by February and March, respectively. The second-warmest April on record was in 2010, when the temperature anomaly was a comparatively paltry 0.87 degrees Celsius, or 1.6 degrees Fahrenheit. On Monday, the Japan Meteorological Agency (JMA), which also tracks global temperatures, backed up NASA in finding that April was the warmest such month on record. The JMA found that the global average surface temperature anomaly for the month was 0.54 degrees Celsius, or 0.97 degrees Fahrenheit, above the 1981-2010 average. This made it the warmest April since JMA records began in 1891, the agency said on its website.

The JMA also found that April 2016 easily outpaced the previous warmest April, which occurred in 2010 and also in 1998, by 0.23 degrees Celsius, or 0.4 degrees Fahrenheit. The unusual April warmth was most pronounced across the Arctic, from Siberia to Greenland and Alaska. Southeast Asia experienced deadly heat waves occurring in Thailand and India, among other nations. Other climate monitoring tools have shown that Arctic sea ice is precariously sparse and thin for this time of year, potentially setting the stage for another record melt season by the end of the summer. The world was already setting more and more warm temperature records without the El Niño’s assistance, but what El Niño has done is dial up the already elevated temperatures to damaging levels. Although El Niño conditions are still present in the tropical Pacific, forecasts call for a La Niña event to develop by the fall.


This will tend to dampen the release of heat from a vast swath of the tropical Pacific Ocean, and may put an end to the parade of record warm months. However, over the long run, global warming will continue as long as greenhouse gas concentrations keep rising. The level of carbon dioxide, which is the main long-lived greenhouse gas, in the Earth’s atmosphere also hit a record high.