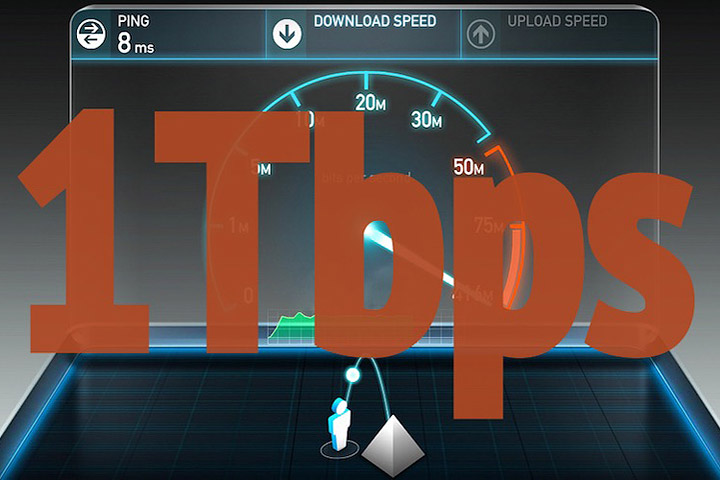 Scientists in Germany have achieved internet speeds averaging a sustained 1 terabit per second (1 Tbps) on an optical fiber network.

At that speed, you’re getting a data transmission rate that’s a whopping 1,000 times faster than services like Google Fibre, which delivers 1 gigabit per second (1 Gbps).

While Google Fibre’s 1 Gbps itself might be considered sufficiently drool-worthy for those of us constrained to the even slower internet speeds of ADSL and cable, it can’t hope to compete to the almost ludicrously fast possibilities of an internet connection that’s 1,000 times faster, delivering 1 terabit per second.


At that speed, you can download 125 gigabytes every single second. That’s about the same amount of data as the storage capacity of the (ageing) MacBook Air that I’m writing this story on. In a second. For a little more in the way of perspective, at that speed, you could download an entire Game of Thrones series in 1 second (in high definition, no less). Or, if you’re more of a film person, in the same sliver of time, you could grab 25 movies weighing in at 5 GB a piece, as William Turton at Gizmodo points out.

The choice is yours. And good luck maintaining that social life of yours. In other words, this wasn’t achieved using any kind of special setup in the lab, but on fiber infrastructure that’s already been deployed in the field.

That’s important to note, because – believe it or not – we’ve actually seen scientists demonstrate even faster internet speeds than this before, but so far only in the lab. Earlier in the year, researchers in the UK hit 1.125 terabits per second using a special system that relayed information over optical fiber on 15 channels simultaneously, creating what the team called a “super channel”. And last year, another British team hit 1 Tbps internet speeds in the lab – this time using a wireless 5G system that relayed data over 100 meters.

By contrast, the new German achievement was made possible despite occurring in what Nokia calls “real conditions”. Probabilistic Constellation Shaping (PCS) works by increasing the efficiency with which data is relayed through a fiber channel. The software ensures that a greater number of low-amplitude signals – called constellations – are used than higher-amplitude signals.

According to the researchers, this enables the transmission rate to be tailored to more ideally fit the channel, and means the signal is less susceptible to noise on the line and other defects.

The findings were only just presented this week at the European Conference on Optical Communication (ECOC) 2016 in Düsseldorf, Germany, and haven’t been published yet – so as yet, other scientists haven’t had a chance to verify the results.

Sadly, there’s no word yet from those involved on when we can expect to see this technology rolled out to internet customers around the world.

While PCS itself appears to work on existing fiber networks, it’s likely ISP infrastructure would need to be tweaked to accommodate the system that makes all this possible, meaning it could still be some time before your Game of Thrones fix gets mainlined in a single second. Sigh.

Good things come to those who wait? We hope so!