Ways to Protect Your Skin and Prevent Skin Cancer 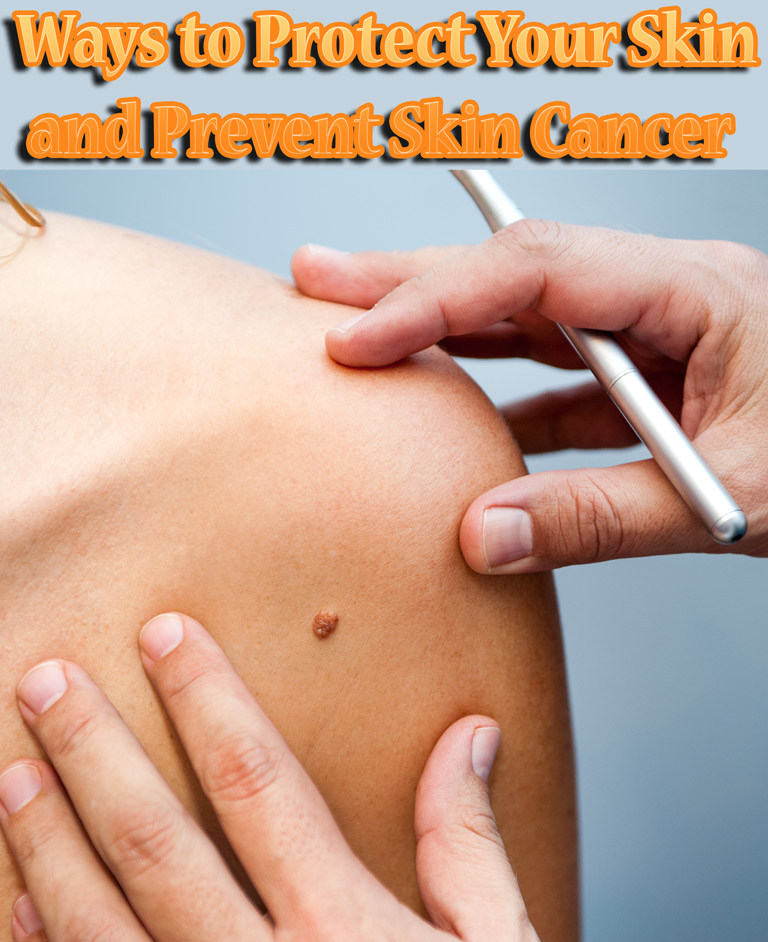 Ways to Protect Your Skin and Prevent Skin Cancer

1. All doctors are not created equal: When researchers from Emory University School of Medicine looked at the records of more than 2,000 melanoma patients, they found that those whose growths had been diagnosed by a dermatologist were more likely to have early-stage cancer — and to survive their disease — than those who’d been diagnosed by another kind of doctor. It may be that dermatologists are more skilled at finding smaller tumors — and less likely to brush them off as “nothing.”

2. So-called harmless basal cell cancers aren’t always so harmless: True, the growths are usually easy to remove, but of the million new cases each year, about 5 to 10 percent can be resistant to treatment, recurring over and over and requiring more extensive surgery. And some basal cells can be very aggressive, damaging the skin around them and even invading bone and cartilage. That’s why if you have a suspicious growth, you should see a doctor promptly. “You want it removed before it disfigures your face,” says Kishwer Nehal, M.D., director of Mohs and dermatologic surgery at Memorial Sloan-Kettering Cancer Center. 3. Your daily coffee fix may help you fend off skin cancer: For each cup of caffeinated java that you drink every day, there’s a 5 percent drop in your odds of developing non-melanoma skin cancer later in life, researchers recently reported. Down a couple of Starbucks’ venti coffees at 20 ounces apiece, and you may score a 30 percent drop in risk (or more — researchers didn’t ask study participants about more than six cups a day). “It’s possible coffee’s antioxidant effect helps to protect against skin cancer,” says Ernest L. Abel, Ph.D., professor of OB-GYN at Wayne State University School of Medicine. “But part of it may be that people who drink a lot of coffee tend to stay indoors more.”

4. You can see a dermatologist for wrinkles a lot faster than for mole checks: In a study from the University of California, San Francisco School of Medicine, researchers posing as patients called more than 800 dermatologists across the country to see how long it would take to get different kinds of appointments. The disturbing results: When “patients” asked for a Botox treatment, the typical wait was eight days. But when their request concerned a changing mole, it went up — to 26 days, on average. Doctors may argue that the current state of health insurance has driven them to sometimes favor cosmetic patients, who pay in full on the day of treatment (insurance companies can take months to reimburse with only a fraction of the fee). Still, a changing mole isn’t a trivial symptom. Make sure the receptionist knows why you need an appointment. If that doesn’t work, ask your primary-care doc to intervene or to recommend another specialist.

5. SPF is only half the story: By law, sunscreen labels must list the familiar sun protection factor, which tells you how effectively the product blocks UVB rays, the ones primarily responsible for sunburn. But there’s no rating system yet for how well a sunscreen stops UVA rays, which penetrate deeper into the base layer of the skin and can cause dangerous cell changes. The FDA has proposed a new sunscreen rule that would include label revisions for UVA. Until they’re in place, David J. Leffell, M.D., professor of dermatology and surgery at Yale School of Medicine, recommends choosing a broad-spectrum sunscreen, which offers greater UVA (as well as UVB) protection. To check if a product fits the bill, look for UVA-screening ingredients, including avobenzone (Parsol 1789) and ecamsule (Mexoryl SX). Or use zinc oxide or titanium dioxide, which are physical blocks that protect against all rays. But the FDA cautions that, no matter how broad-spectrum, sunscreen isn’t enough — you must wear sun-protective clothing, too.

6. If you live in Fargo, ND, and always use sunscreen, your risk of melanoma can be greater than your friend’s in Miami: For years, researchers had puzzled over the fact that sunscreen users seemed more likely to develop melanoma than those who didn’t protect themselves. But now scientists from the University of California, San Diego, may have figured out why. In a recent study, they found that the unexpected connection applies mainly to people with fair complexions in northern latitudes (north of Philadelphia or Boulder). They speculate that sunscreen users in northern areas never feel the burning that would warn them to cover up or get out of the sun because their lotions do a good job of blocking UVB rays. But meanwhile, they’re being exposed to hundreds of times more cancer-causing UVA rays than they’d be able to tolerate if they weren’t using sunscreen. Bottom line: Whatever your latitude, you need to practice sun-safety measures. 7. You’re not fooling anyone with your tanning-bed habit — especially your skin: Despite what the salon receptionist may say, there’s no evidence that browning yourself in a bed is any safer than doing it at the beach. “Even though there are federal guidelines for the amount of time someone should spend in a tanning bed, we know these are not always followed,” says Michael J. Franzblau, M.D., clinical professor of dermatology (emeritus) at the University of California, San Francisco. The numbers tell the story: People who frequent tanning salons are 2.5 times more likely to develop squamous cell cancer and 1.5 times more likely to develop basal cell. If you’re still an indoor sunbather — a recent survey shows that over 15 percent of women in their 40s and 10 percent in their 50s and early 60s use tanning beds — stop now. But even if you’ve given up the habit, you could be in trouble. Exposure to tanning beds before age 35 significantly increases your risk of melanoma. Protect yourself by being vigilant about monthly self-exams and yearly derm checks.

8. Like children, skin cancers don’t always follow rules: The ABCDE rules for melanoma have been well publicized, but not all melanomas conform. One type, amelanotic melanoma, for example, has no brown or black. Another kind, nodular melanoma, is often symmetrical, with fairly regular borders and few colors, says David Polsky, M.D., Ph.D., assistant professor of dermatology and pathology at NYU Medical Center. And invasive melanomas can be smaller than six millimeters — the guideline in the ABCDE rules. The rule for you: Don’t dismiss an odd-looking or changing mole because it doesn’t resemble the textbook example; show it to a dermatologist.

9. If you’re dark skinned, skin cancer is far less common — and far more likely to be fatal: No one’s sure why, but among African Americans, Asians, and Hispanics, UV radiation does not play as strong a role in squamous cell carcinoma and melanoma as it does in Caucasians, says Hugh Gloster, M.D., associate professor of dermatology at the University of Cincinnati. He has found that non-Caucasians are far more likely to develop melanoma on the soles of the feet and palms of the hands than on areas that are more heavily sun-exposed like the face and chest. That and the likelihood that doctors aren’t looking for skin cancer among dark-skinned patients means the disease may be diagnosed at a later, more dangerous stage, say experts. Since UV rays do play a part in all skin cancers, and basal cell is an equal-opportunity enemy, people of all skin shades need to protect themselves in the sun.

10. You really can get skin cancer where the sun don’t shine: The same human papillomavirus (HPV) that’s responsible for cervical cancer can cause squamous cell carcinoma of the genitals. While squamous cell growths have at least a 95 percent cure rate overall, those in the genital region tend to be found later, which lowers your odds of survival, says Martin A. Weinstock, M.D., Ph.D., professor of dermatology and community health at Brown University. In a recent review of national mortality records, he found that non-melanoma skin cancers on the genitals, though much rarer than those on other parts of the body, caused about as many deaths. Women were particularly vulnerable; roughly three times as many females as males died of this cancer. Be sure to check the genital area when doing your monthly skin exam, advises Dr. Weinstock. If anything looks suspicious, show a dermatologist.

11. Your husband may not be much help around the house, but when it comes to skin cancer, he could be a lifesaver: Working with a partner significantly ups the regularity of skin exams, reports June K. Robinson, M.D., professor of clinical dermatology at Northwestern University’s Feinberg School of Medicine. And that could make all the difference: Previous studies have found that melanoma deaths could be lowered by as much as 63 percent if people performed monthly self-exams.

12. Painted toes look pretty, but what lies beneath may be deadly: Melanoma of the foot can hide under and around the nails and between the toes. And because this cancer has usually spread by the time it’s diagnosed, it has a fatality rate of 50 percent. If you polish your toes, remove the color at least once a month and inspect your whole foot, including the sole. Also, don’t forget sunscreen — on the tops and soles of the feet, says foot and ankle surgeon Neil Campbell, D.P.M.

Why Should You Visit a Cosmetic Dentist? 6 years ago
← Eco-Friendly Essential Oils Cleaning Solutions
Reasons To Love Roasted Vegetables →