Top 10 Most Difficult Instruments To Play 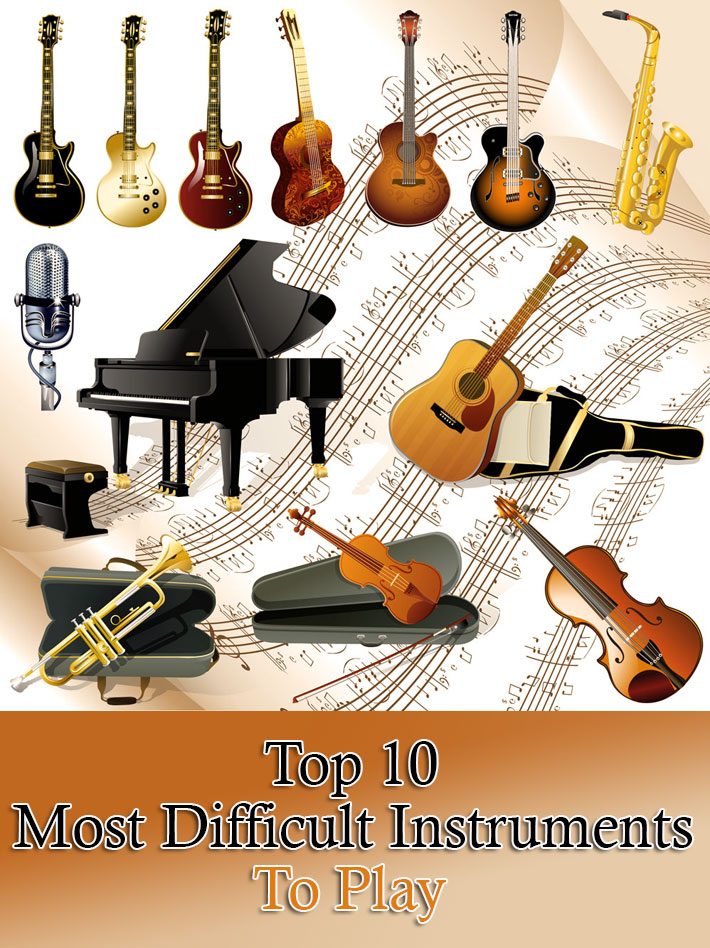 It gives a soul to the universe, wings to the mind and life to everything. Every music produced has the power to bind the unconscious to the conscious. It has the power to awaken the slumbering souls. When nature created man she also gave life to an ethereal gift. This gift gave birth to musicians and musical instruments.

Today we have flutes, pianos, guitars, organs, drums, pipes, bugles and what not. They produce eternal music that has the power to heal the ailing soul and make a happy man the happiest! They help in connecting your mind and your body, allowing you to be emotionally authentic and expressive. Given below is a list of the most difficult musical instruments: The drums belongs to the percussion group of musical instruments. They have at least one membrane called the drum-head or the drum skin that is stretched over a shell and is struck using a drum stick. Its basic design has remained unchanged and is the world’s oldest musical instrument. Diembe, a kind of drums can be played by a single drummer while others like bongo drums and timpani requires a set of two or more players. Similarly a jazz drummer would want drums that are high pitched and resonant while a rock drummer may prefer drums that are low pitched, loud and dry. Today handmade drums are used in music therapies because of their tactile nature. Centuries back drums were even used in religious ceremonies. Accordions are a family of box shaped musical instruments that are bellows-driven. It is also known as squeezebox (in colloquial usage). The harmonium and the American reed organ also belong to the same family. An accordionist plays the accordion by compressing or expanding the bellows while pressing the keys. In Europe, North and South America the accordion is commonly used in folk music. It is also used as a solo instrument or an accompaniment in classical music. The accordion was once known as harmonika (from the Greek harmonikos) meaning harmonic, musical. The piano is played using a keyboard and is widely used in classical and jazz music for solo performances, chamber music and accompaniment and for composing and rehearsal. The sound board and the metal strings are covered using a protective wooden case. One of the world’s most familiar instruments, the piano is in fact the shortened from of pianoforte, the Italian word for the instrument. Piano and forte implies ‘soft’ and ‘strong’ respectively in Italian which in turn refers to the variations in the sound volume the piano produces in response to a pianist’s touch on the keys. The harp is a multi-stringed musical instrument that belongs to the category of chordophones (stringed instruments). Technically a harp consists of a neck, resonator and strings (positioned perpendicularly to the sound board). Nylon, gut, wire or silk is used to make the strings of a harp. Many baroque and classical composers like Mozart and Dussek used the harp as a solo instrument in concerts and orchestras. Casper Reardon, a pioneer in the world of ‘hot’ music was the first known harpist to play jazz. Regular improvements in their design also helped the harp in finding its way into modern music. Bagpipes are aerophones (a category of musical instrument) that uses enclosed reeds. The instrument created sensational music throughout Europe, the Caucasus, around the Persian Gulf and Northern Africa since the time of its invention. It has nine notes that should be played at a constant pressure to prevent the chanter from falling out of tune.

Though the exact date of origin of the bagpipe is unknown, The Oxford History of Music records the sighting of a sculpture of Bagpipes on a Hittite slab at Euyuk in the Middle East that dates back to the 1000 BC. A soprano-ranged, double reed musical instrument of the woodwind family, the Oboe is a wooden tube about 65 cm long with metal keys, a conical bore and a flared bell. The distinctive Oboe tune played by an oboist is described as ‘bright’ and is produced by blowing into the reed and vibrating a column of air. The instrument was called the hautbois, hoboy or French hoboy before it received its present name. The Sprightly Companion, an instruction book refers to the Oboe as “majestic and stately, not much inferior to the trumpet”. Among the wide variety of musical instruments, oboes are the most easily audible because of its clear and penetrating voice. The reed is the most important of an Oboe because of its significant effect on the sound produced. Developed from its predecessor the shawm, the Oboe originated in the 17th century. The organ is a keyboard instrument with one or more divisions; each having a different keyboard that is played either with the hands or with the feet. A relatively old piece of art, the organ along with the clock is remarked as one of the most complex man-made mechanical creations before the Industrial Revolution.The organ has been the heart and soul of the Western musical tradition since the time of Ctesibius of Alexandria who invented the hydraulics. The most distinctive feature of an organ is its ability to range from the slightest sound to the most powerful. No wonder Wolfgang Amadeus Mozart called the organ the “King of instruments”.

The horn, also known as the corno or the French horn is a brass instrument. It is made up of more than 20 feet of tubing wrapped into a coil with a flared bell. Any wind instrument with a flared exit for sound is also referred to as a horn. The mouthpiece of the horn is the key to making an excellent horn player. The adjustment of lip tension in the mouthpiece helps in controlling the pitch. Equally important is the operation of the valves by the left hand which route the air into the tubing. The French horn is a descendant of the natural horn (a horn without valves, similar to a bugle) and is German in origin. The violin, also known by the name of fiddle is the smallest high-pitched string instrument. It usually has four strings tuned in perfect fifths. The violinist or the fiddler normally uses a bow to play the violin by drawing it across the strings. The name was derived from the Medieval Latin word vitula meaning stringed instrument. Generally a violin is made using different types of wood by the luthier (the one who makes a violin) and is strung with a gut, synthetic or steel strings. Though of ancient origin, the violin has aided musicians in playing a variety of music genres- classical, jazz, folk music, rock and roll, soft rock etc to name a few.

15 Things That Have Been Banned 6 years ago