Are there really dead fig wasps in your figs? 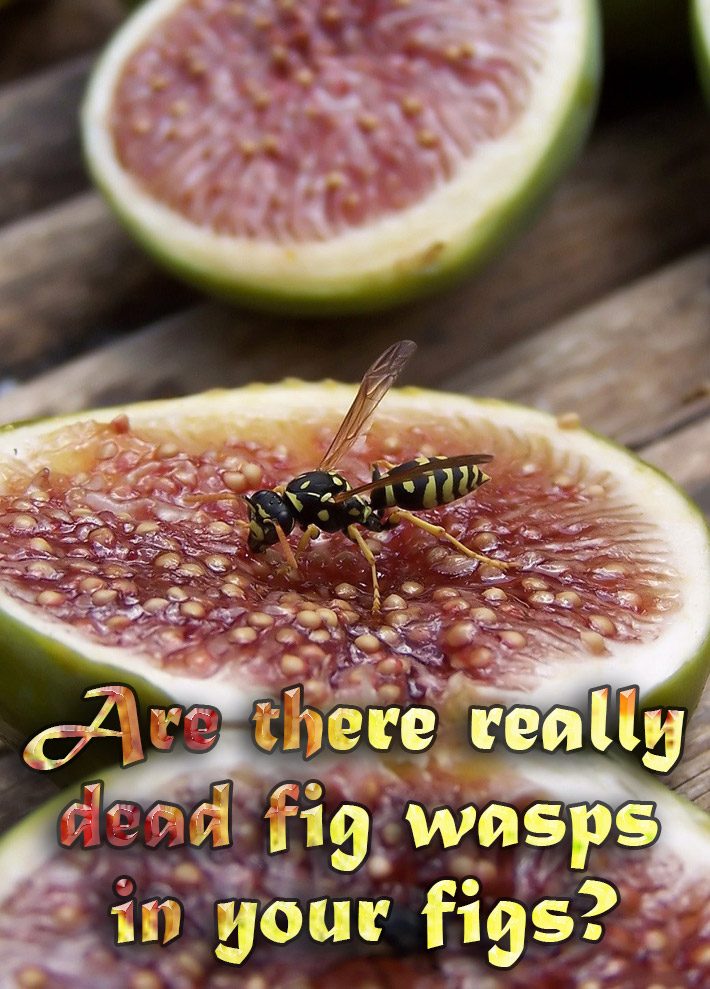 Figs are one of humanity’s favorite fruits, dating back as far as the Romans and adorning modern cheese plates from Texas to Tasmania. But as with most good things that the Internet has to ruin, figs are more complex than meets the eye– or so is true of the process by which they are pollinated.

In simple terms, figs are technically not a fruit ― they are inverted flowers. Fig trees don’t flower like apples and peaches. Their flowers bloom inside the pear-shaped pod, which later matures into the fruit we eat. Each flower then produces a single, one-seeded, hard-shelled fruit called achene ― that’s what gives the fig the crunch we know ― and the fig is made up of multiple achene. So when we eat a fig we are actually eating multiple fruits.

But that’s not the end of the uniqueness that sets the fig apart.

The female fig wasp enters the male fig ― we don’t eat the male figs, by the way ― to lay its eggs. The male fig is shaped in a way to accommodate the laying of wasp eggs. The female wasp’s wings and antennae break off when entering the small passage in the fig so once it’s in, there is no way out.

If a female wasp enters a caprifig, she’ll find male flower parts that are perfectly shaped to hold the eggs she’ll eventually lay. The eggs will grow into larvae, which will develop into male and female wasps. After hatching, the blind, wingless male wasps will spend the remainder of their lives digging tunnels through the fig. The female wasps then emerge through these tunnels and fly off to find a new fig — carrying precious pollen with them.

If a female fig wasp enters an edible fig, she eventually dies from exhaustion or starvation. The female flower parts include a long stylus that hinders her attempts to lay her eggs. She may die, but she succeeds in delivering the much-needed pollen first. So a fig farmer winds up with caprifigs full of wasp eggs and edible figs full of seeds.

Don’t worry, this doesn’t mean the crunch in the fig is a wasp carcass. The fig uses an enzyme known as ficin to break down the wasp into protein, though it doesn’t always break down the entire exoskeleton. So, yes, technically when you bite into a fig you are in fact eating fig wasps ― or what once was a fig wasp ― but you can at least console yourself with the fact that they’re incredibly small. The crunchy bits in figs are seeds, not anatomical parts of a wasp.

Fig farmers want to keep the number of fig wasps entering edible figs to an acceptable minimum. While the insect’s cooperation is mandatory for the fig to ripen, too many wasps entering will result in over-pollination. Then this fig might be filled with so many seeds that the fruit-like syconium bursts open. While this is good for the plant, it hurts the finished harvest for farmers. To prevent this, farmers separate male and female trees over great distances. Farmers also supply a controlled number of new wasps, often delivered in paper sacks, to dictate exactly how many females have access to a given plant. This means fewer fig wasps inside when the time comes to harvest.

It’s also important not to get too bent out of shape over the possibility of accidently eating the occasional insect. Even with the use of modern pest control, insects partially contaminate most agricultural products upon harvest and on the way to market. From canned corn to curry paste, from premium coffee to peanut butter, most foods contain insects. For example, when tomato ketchup qualifies for the highest USDA grade standard possible, it’s required to contain no more than 30 fruit fly eggs per every 100 grams (3.5 ounces).

For some people, no amount of explaining is likely to suffice. Some vegetarians and vegans refuse to eat figs and fig products based on the possibility of insect content. The dead fig wasps in question, however, were just playing their vital ecological role. There are 900 species of fig wasp, and each is responsible for pollinating one or two species of fig plant. Without fig wasps, there would be no figs — and vice versa.

Incredible Sounds of the Earth by Genadi Tkachenko 6 years ago