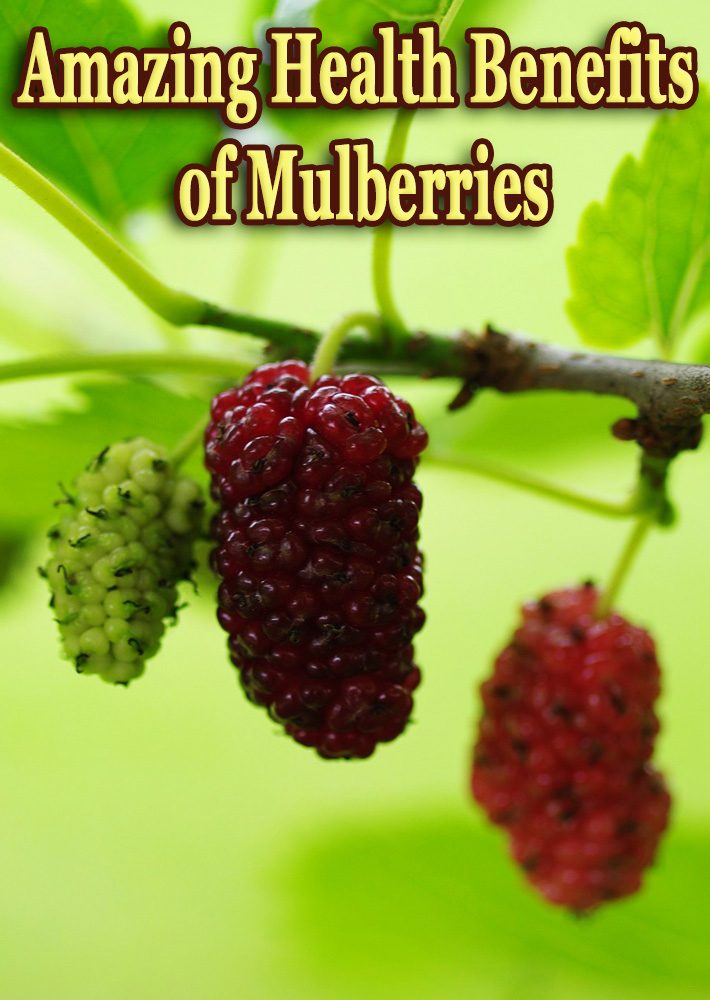 Mulberries are the sweet, hanging fruit from a genus of deciduous trees that grow in a variety of temperate areas around the world. Thought to possibly have originated in China, they have since spread throughout the world and are highly praised for their unique flavor, as well as a truly impressive and unusual composition of nutrients for a berry. In fact, most varieties found in different parts of the world are considered to be “native” from those areas, as they are so widespread.

The scientific name of mulberries varies depending on which species you are looking at, but the most common types are Morus australis and Morus nigra, but there are dozens of other delicious varieties as well. In terms of appearance, the berries grow very fast when they are young, but gradually slow as their color changes from white or green through to pink or red, and eventually settling on dark purple or even black. 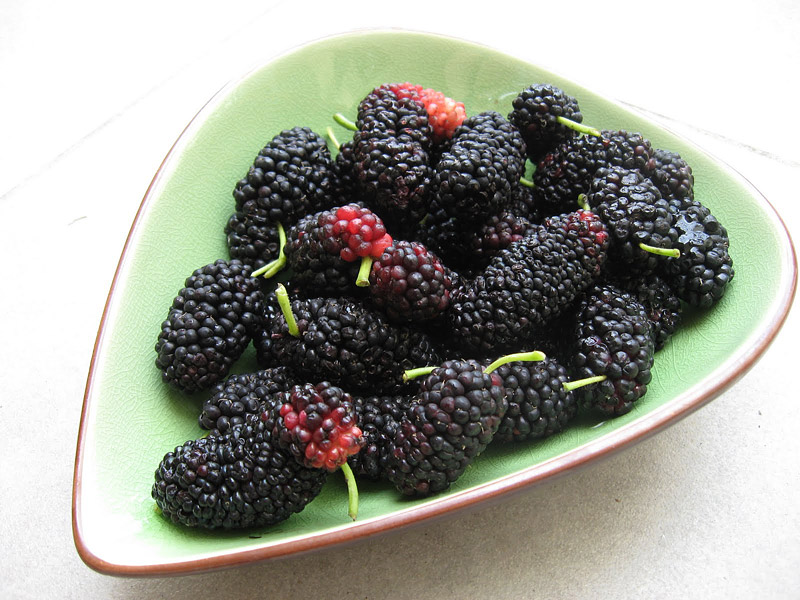 In culinary preparations, the sweet or tart flavor of most varieties make these berries ideal for sherbets, jams, jellies, fruit tarts, pies, wines, teas, and cordials. In certain areas of the world, the flavors of the mulberry varieties differ, but the American mulberry and the black mulberry are considered to have the most powerful flavor and are widely sought after. Interestingly, the mulberry tree presents another very important function, besides providing people with delicious berries.

The leaves of the mulberry tree are also the only known food source of silkworms! For human consumption, the berries are delicious, but they are also composed of some very unique nutritional elements that can have a serious impact on our health. Let’s explore what is packed inside there berries that make them so important!

Mulberries are filled with nutrients that are important for our body, including iron, riboflavin, vitamin C,vitamin K, potassium, phosphorous, and calcium, as well as a significant amount of dietary fiber and a wide range of organic compounds, including phytonutrients, zea-xanthin, resveratrol, anthocyanins, lutein, and various other polyphenolic compounds.

Fresh mulberries contain 88% water and only 60 calories per cup (140 grams). Mulberries are often consumed dried, similar to raisins. When dried, they contain 70% carbs, 14% fiber, 12% protein and 3% fat, which makes them fairly high in protein, at least compared to most berries.

Digestive Health: Like the majority of fruits and vegetables, mulberries contain dietary fiber, approximately 10% of your daily requirements in a single serving, in fact. Dietary fiber can help to improve digestive health by bulking up stool, thereby speeding up the movement of food through the digestive tract, while also reducing occurrences of constipation, bloating, and cramping. Furthermore, fiber helps to regulate cholesterol levels and can boost heart health when regularly added to the diet.

Circulation: The high levels of iron contains in mulberries, which is a very unusual mineral for fruits to contain, can significantly boost the body’s production of red blood cells. This means that the body will increase its distribution of oxygen to important tissues and organ systems, thereby helping to boost metabolism and optimize functionality of those systems. 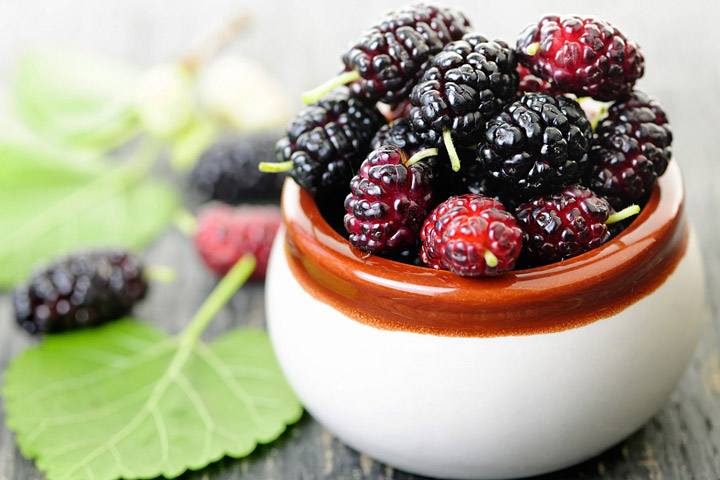 Blood Pressure and Heart Health: Resveratrol is a very important flavonoid antioxidant that directly affects the functioning of certain mechanisms in blood vessels, primarily making them less prone to damage by angiotensin, which can cause blood vessel constriction. In fact, resveratrol increases the production of nitric oxide, which is a vasodilator, meaning that it relaxes blood vessels and reduces chances of blood clot formation and subsequent heart issues like strokes or heart attacks. Resveratrol is found in many dark-skinned berries like mulberries, including most grapes, which is why this beneficial antioxidant is also found in many wines.

Cancer Prevention: Between the high content of anthocyanins, vitamin C, vitamin A, and various other polyphenolic and phytonutrient compounds, mulberries are absolutely packed with antioxidant potential. Antioxidants are the main line of defense against free radicals, which form as a dangerous byproduct of cellular metabolism and can damage healthy cells, causing them to mutate into cancerous cells. The diverse range of antioxidants found in mulberries means that they can neutralize these free radicals quickly, before too much damage is done.

Vision Health: One of the carotenoids found in mulberries is zea-xanthin, which has been connected directly to a reduction in oxidative stress on certain ocular cells, including the retina macula lutea. Furthermore, zea-xanthin functions as an antioxidant and prevents certain damage to the retina, including from free radicals that can cause macular degeneration and cataracts.

Immune System: Vitamin C is a powerful defensive weapon against any illnesses or foreign pathogens in the body that antioxidants don’t take care of. A single serving of mulberries is almost the entire requirement of vitamin C for the day, but combine that with the minerals and vitamins that are in this fruit, and you have a true weapon against illness. Add a few mulberries to your morning and watch your immune system health soar!

Build Bone Tissue: Vitamin K, calcium, and iron, as well as the trace amounts of phosphorous and magnesium found in mulberries, can all be beneficial for the creation and maintenance of bone tissue. As we get older, maintaining strong bones, speeding up the healing process, or even reversing the damage of bone degradation is important to prevent conditions like osteoporosis or other age-related bone disorders.

Antioxidants and Premature Aging: Mulberries also boast a high level of vitamin A and vitamin E, as along with a range of carotenoid components like lutein, beta carotene, zea-xanthin, and alpha carotene. All of these elements act as antioxidants that specifically affect the skin, tissue, hair, and other areas of the body where free radicals strike. Mulberries can help keep skin looking smooth, reduce the appearance of blemishes and age spots, and keep hair shiny and healthy by preventing the oxidative actions of free radicals.

A Final Word of Caution: Some mulberries are very good at lowering blood sugar levels, which is beneficial for some, but also very dangerous for others. Also, there are rare cases of allergies to mulberry, so use them in moderation and monitor your body’s reaction if eating them for the first time! 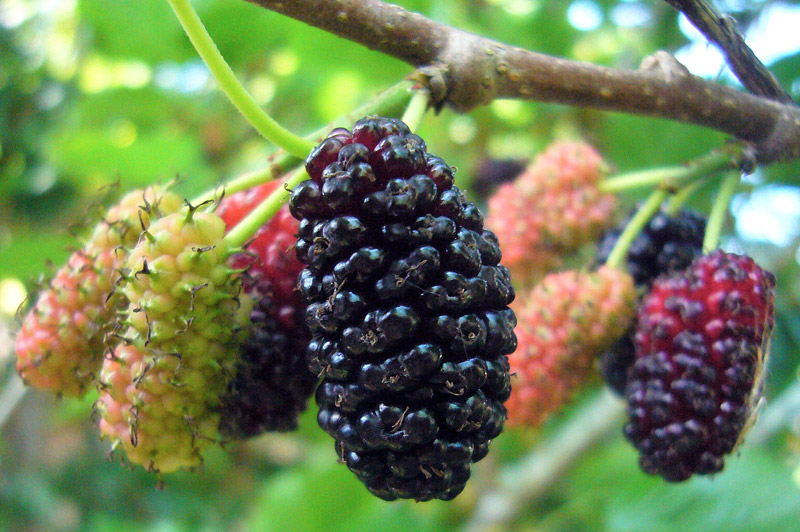 Thanks for sharing this!
← How To Create A Great Landscape Design
How to Flawlessly Cover Up Skin Imperfections →