This Desk Will Let You Work Lying Down 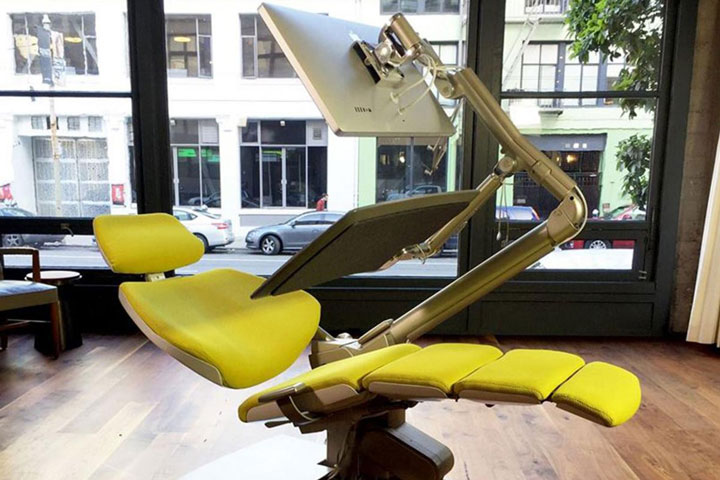 Sonoma Valley, Calif. based startup Altwork has announced its first product, the Altwork Station, a workstation allowing users to sit and stand in all manner of positions. The Station, which the company says is designed for “high-intensity” computer users costs $5,900, but the company is selling its first run for $3,900. This workstation is being marketed towards programmers, designers, writers and anyone else who uses a computer as their primary working tool.

The Altwork Station offers four modes, all configurable with buttons on the desk surface; standing, collaboration, regular and focus. Standing and regular are exactly what you’d expect and collaboration is simply turning your monitor on the built in arm to work with others. Focus mode is where it gets interesting though, as that’s where you can recline the chair to be completely horizontal, with the desk and monitor following suit.

To prevent everything from, you know, falling on you while you lay down, Altwork equipped the desk with magnets to keep your keyboard, mouse and other peripherals in place. The idea behind having multiple configurations is that different tasks lend themselves better to different positions. For example, Che Voigt, one of the company’s founders, often starts his day standing but reclines later in the day when he needs to focus more intensely on a particular task.

I tried the Altwork Station at a demo put on by the company in Manhattan and I can see what he’s on about. After I got over the initial amusement of lying down, my mind calmed, with stray thoughts slowing down noticeably. Returning to a more conventional seated position definitely had an effect on my mental process.

This workstation made me acutely aware of my body and in turn, how poorly I sit in normal chairs. Sitting (and lying) in this chair felt like getting a massage on my neck and shoulders, which pointed out to me how much tension I carry in that area while I work.

The company’s basic guiding principle is that the way humans sit at a desk and work hasn’t evolved since the proliferation of the typewriter in the late 1800s, which doesn’t make sense in 2015. In the company’s eyes, the Altwork Station is a workstation for the 21st century.

Altwork believes that the ability to seamlessly work in a variety of different positions will increase efficiency for those so-called “high-intensity” computer users.

Of course, that efficiency doesn’t come terribly cheap, even considering the $3,900 “early adopter” price. That being said, the Station is made in the U.S. and features some very complex engineering. Especially complicated is the leg support portion, which folds in like almost like a scorpion’s tail; according to Voigt, it was one of the most complex parts to develop.

The color scheme of the chair is highly customizable and users can configure presets on the control panel.

One of the company’s big goals was fitting the chair in the same area as a cubicle, so it will better fit in open office plans. The problem I foresee with this is that offices would have to be layed out around these chairs; for example, Mashable has nearly everyone working in desks across from each other, so these workstations wouldn’t work here.

The magnets in the desk are a great solution to working in a reclined position, but I found it very weird having to hold the mouse against the surface, rather than it not wanting to fall. This would probably be less of an issue with a fixed trackpad. The only other issue was that it was somewhat difficult to get the desk to move smoothly at first, but this likely wouldn’t be an issue once you’re used to the desk.

For reasons of packaging, I struggle to see rows and rows of these in large offices, but for smaller, progressive offices or for those who work from home, these sort of make sense. It’s the sort of product that won’t appeal to everyone, but for a small subset of people, it will be perfect.

Top 10 Most Dangerous Sports in the World 6 years ago