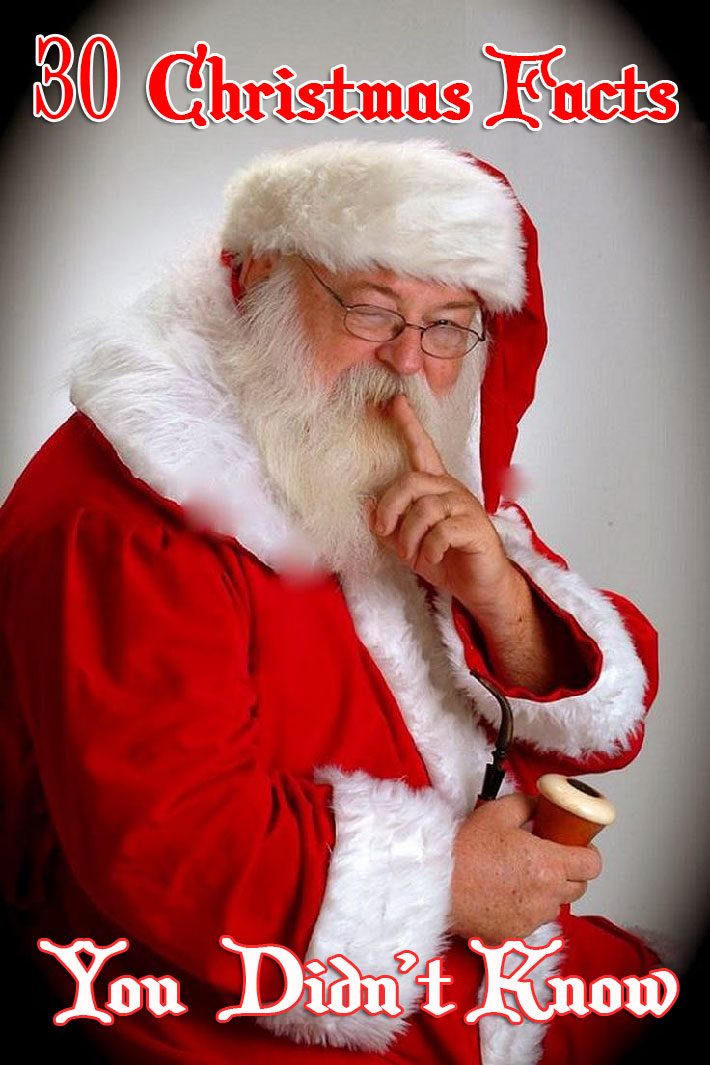 This the season to be…well informed. We all love Christmas, but how much do any of us actually know about why Christmas is the way it is? Here are 30 Christmas facts: about Christmas trees, Santa Claus, and Rudolph that you (probably) didn’t know. Smarten up!

1. Christmas supposedly marks the birth of Jesus Christ on December 25. But there is no mention of December 25 in the Bible and most historians actually believe he was born in the spring. 2. December 25 was probably chosen because it coincided with the ancient pagan festival Saturnalia, which celebrated the agricultural god Saturn with partying, gambling, and gift-giving.

3. Many of the popular Christmas traditions today found their roots in Saturnalia: Branches from evergreen trees were used during winter solstice as a reminder of the green plants that would grow in spring when the sun gods grew strong.

4. These evergreen branches became the foundation of our Christmas tree. Germans are thought to be the first to bring “Christmas trees” into their homes at the holidays and decorate them with cookies and lights.

5. The Christmas tree made its way to America in the 1830s but wasn’t popular until 1846, after Germany’s Prince Albert brought it to England when he married Queen Victoria. The two were sketched in front of a Christmas tree and the tradition instantly became popular. Royal fever was real even back then.

6. The well-known reason we give presents at Christmas is to symbolize the gifts given to baby Jesus by the three wise men. But it may also stem from the Saturnalia tradition that required revelers to offer up rituals to the gods. 7. Because of its roots in pagan festivals, Christmas was not immediately accepted by the religious. In fact, from 1659 to 1681, it was illegal to celebrate Christmas in Boston. You were fined if you were caught celebrating.

8. Santa Claus comes from St. Nicholas, a Christian bishop living in (what is now) Turkey in the fourth century AD. St. Nicholas had inherited a great deal of wealth and was known for giving it away to help the needy. When sainted, he became the protector of children.

9. After his death, the legend of St. Nicholas spread. St. Nick’s name became Sint-Nicolaas in Dutch, or Sinter Klaas for short. Which is only a hop, skip, and jump to Santa Claus.

10. Santa Claus delivering presents comes from Holland’s celebration of St. Nicholas’ feast day on December 6. Children would leave shoes out the night before and, in the morning, would find little gifts that St. Nicholas would leave them.

11. And stockings come from this story: A poor man with three daughters couldn’t afford the dowry to have them married. One night, St. Nicholas dropped a bag of gold down the man’s chimney so that his oldest daughter would be able to get married, and the bag fell into a stocking that was drying by the fire. 12. One of the reasons we leave milk and cookies for Santa is because Dutch kids would leave food and drink for St. Nicholas on his feast day.

13. And we leave carrots for Santa Claus’ reindeer because, in Norse mythology, people left hay and treats for Odin’s eight-legged horse Sleipnir “in hopes the god would stop by their home during his Yule hunting adventures.” Dutch children adopted this tradition too, and would treats for St. Nick’s horse.

14. The look of Santa Claus we have today was created at an 1804 meeting of the New York Historical Society, where member John Pintard handed out wooden cutouts of jolly old St. Nick in front of stockings filled with toys.

15. Though Santa Claus has worn blue and white and green in the past, his traditional red suit came from a 1930s ad by Coca Cola.

16. And the image of him Santa Claus flying in a sleigh started in 1819…and was dreamt up by the same author who created the Headless Horseman, Washington Irving.

17. Rudolph was actually conceived by a department store, Montgomery Ward, as a marketing gimmick to get kids to buy holiday coloring books.

18. Rudolph almost didn’t have a red nose either: At the time, a red nose was a sign of chronic alcoholism and Montgomery Ward thought he would look like a drunkard. 19. Rudolph was almost named Rollo or Reginald. Reginald the Red-Nosed Reindeer doesn’t quite have the same ring to it.

20. The poem that introduced us to the other eight reindeer, “A Visit From St. Nicholas,” actually named dropped Dasher, Dancer, Prancer, Vixen, Comet, Cupid, Duner and Blixem. (Which, like Donner and Blitzen, come from the German words for thunder and lightning.)

21. Over the years, other reindeer have been name checked on Santa’s sleigh team, such as: Flossie, Glossie, Racer, Pacer, Scratcher, Feckless, Ready, Steady, and Fireball (no relation to the whiskey).

22. The first batch of eggnog in America was crafted at Captain John Smith’s Jameston settlement in 1607, and the name eggnog comes from the word “grog,” which refers to any drink made with rum.

23. “Silent Night” is the most recorded Christmas song in history, with over 733 different versions copyrighted since 1978.

24. Legend has it that “Silent Night” was written by a Father Joseph Mohr in Austria, who was determined to have music at his Christmas service after his organ broke. In reality, a priest wrote it while stationed at a pilgrim church in Austria.

25. Meanwhile, “White Christmas” is the best-selling song of all time. 26. “Santa Claus Is Coming to Town” actually has a truly depressing back-story: songwriter James “Haven” Gillespie was broke, jobless, and his brother had just died when he was asked to write a Christmas song. He was originally too overcome with grief, but eventually found inspiration in his brother’s death and the Christmas memories they had together.

27. The original lyrics to “Hark! The Herald Angel Sings” were “Hark! How the Welkin rings!” Welkin is an old, English term for Heaven. A preacher later tweaked the lyric.

28. “Jingle Bells” was originally supposed to be a Thanksgiving song.

29. Boston church leaders tried to have the song “I Saw Mommy Kissing Santa Claus” banned in the 1950s because they thought it “promoted physical intimacy.” Singer Jimmy Boyd had to fly to Boston and explain to them why it wasn’t obscene.

30. Mariah Carey’s “All I Want for Christmas Is You” is considered to be the most popular Christmas song now. In the music video, Santa is played by Mariah’s then-husband, Tommy Mottola.