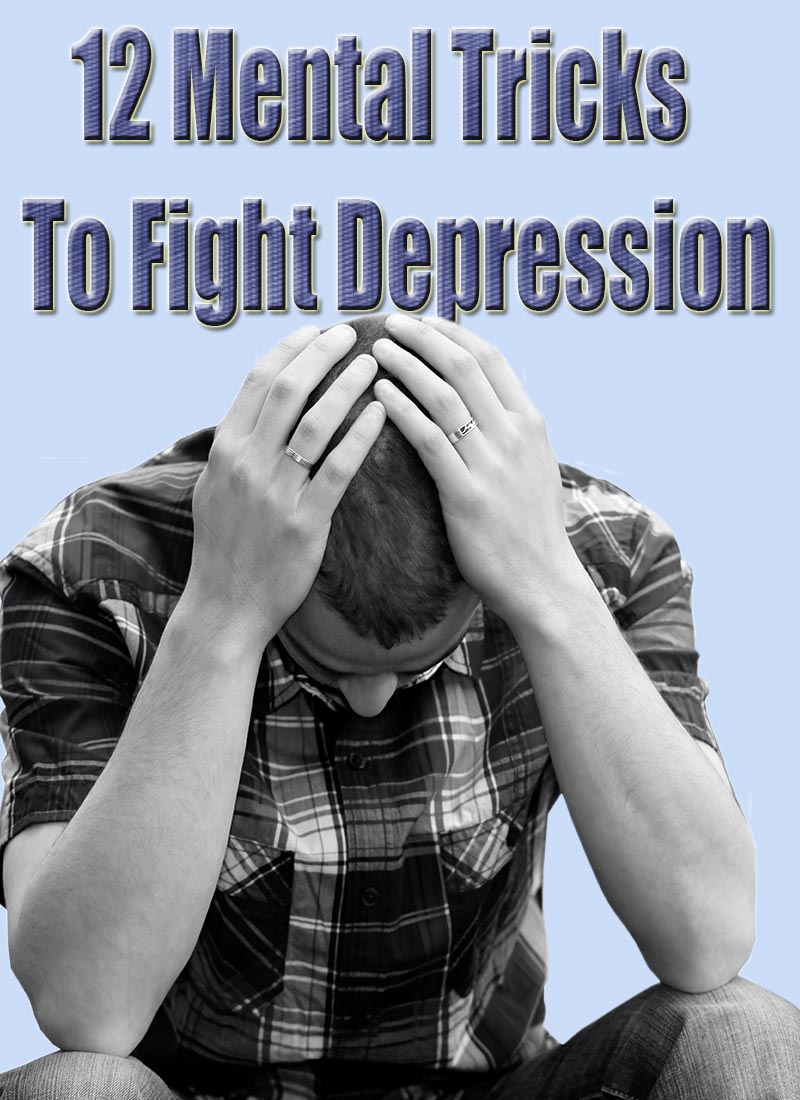 Medication can help depression. But a type of therapy called cognitive behavioral therapy (CBT)—which focuses on changing behavior, rather than talking about your childhood, for instance—can be an effective adjuvant to or even substitute for drugs. “It’s much more focused on what you seem to be doing and thinking that is keeping you depressed,” Simon Rego, PsyD, director of psychology training at Montefiore Medical Center in New York City. Some of its methods can be practiced at home, on yourself, with no special training. So here are some tips for breaking the cycle of negativity.

One way to sabotage yourself is to take a single event and treat it as an ongoing source of negativity. “People who are unemployed do this a lot,” says Rego. “They’ve lost their job because of the economy and they personalize it.”

It’s also unhealthy to catastrophize—focus on the worst imagined outcome, even if it’s irrational. For example, don’t let concerns about money escalate into the conviction you’ll soon be homeless. Ever clash with a colleague or fight with a friend and then keep obsessively thinking about it, amplifying the anger, stress, and anxiety associated with the memory? Known as rumination, this type of thinking is linked to a greater risk of becoming or staying depressed.

While reflection is a good thing, and may help you solve problems, rumination does the opposite.

If you catch yourself ruminating, studies suggest it may help if you try to distract yourself, meditate, or redirect your thoughts. Cognitive behavioral therapy often targets rumination because it can be so damaging to mental health.

Very few (if any) of us are blessed with the ability to predict the future. But depressed people will often convince themselves they know what will happen a day, a month, or a year down the line. And it’s usually bad, if not downright catastrophic.

Try to stay in the present. It’s much more manageable and you’re less likely to blow things out of proportion.

Don’t dwell on the past

It’s pretty pointless to tell yourself you should have done this or shouldn’t have done that. You can’t change the past, but you can live in the present.

Just accept that you made the best decisions you could have made with the information or resources you had at the time. Hindsight is always 20/20, so best to try to just let it go and don’t beat yourself up for perceived missteps.

And do a rumination check; ruminating about the past can generate anxiety, just as worry about the future. Reach out to others

A hallmark of depression is isolation. It can happen easily if you’re not working, or you’re avoiding people because you’re depressed. But reinvigorating or expanding a social network provides an opportunity to get support, perhaps even from people in the same or a similar situation, says Rego.

“Once you start reconnecting with people, you get a sense they understand,” he says. “You get positive advice and encouragement and it’s often done in activities that end up being fun.”

Staying home alone will perpetuate the depression. Getting out with other people—even a little bit—will lift your spirits.

Stick to a structured routine

Even if you don’t feel like it, make sure you get up at a set time, eat meals at the same hour every day (even if you’re not hungry), and avoid lounging on the couch during the day lest it prevent you from sleeping well at night.

“People who are depressed tend to eat or sleep inconsistently,” says Rego. “Even if you’re unemployed or feeling down, it’s really important to set and establish a daily routine as best you can. This gives you a sense of regularity that can help with a depressed mood.”

If you can incorporate socializing into your routine, all the better.

Black and white is great for zebras, but not thoughts. Depressed people tend to think in extremes: I’m a loser. No one loves me. I’ll never get a job.

But your thought patterns could put you in a rut or keep you there. “Being depressed or sad is going to color the way you think about yourself in a negative direction,” says Rego.

These thoughts can paralyze you and stop you from doing the very things that will get you out of a lousy situation. Try to think in shades of gray, says David R. Blackburn, PhD,a psychologist with Scott & White Hospital in Temple, Texas. Instead of “no one loves me,” try “lots of people (if not everybody) love me.” If you’re depressed, negative thoughts go with the territory. However, they are rarely grounded in reality.

Once you’ve identified a negative thought, ask yourself, “Where is the evidence that I’m the most despicable human being on the entire earth?” There probably isn’t any.

“You can’t just be rattling these thoughts back and forth and saying they’re true,” says Blackburn. “You have to come up with some solid evidence.”

And if you’re worried about what people are thinking about you, go ahead and ask them.

Select a few simple, straightforward goals you can easily set and follow, suggests Rego. Those goals should be SMART, which stands for “specific, measurable, attainable, rewarding, and time-limited.”

So for example, deciding you will have a job by the end of the week is unrealistic.

But deciding to post two resumes online by the end of the week, on the other hand, is SMART. “It’s specific. It’s attainable. It’s not that much effort to do and it could be rewarding,” says Rego.

Fake it a bit

Write down all the things you used to like doing that you’ve stopped doing because you’re sad and depressed, suggests Rego, who is also assistant professor of psychiatry and behavioral sciences at Albert Einstein College of Medicine.

That could be going to the movies, socializing with friends, or simply going to the corner coffee shop with a newspaper.

Then, one by one, start reincorporating these activities into your life even if you’re feeling unenthusiastic about it. Also, focus on tasks that can give you a sense of mastery or accomplishment, whether it’s tidying up the apartment or paying the bills. That can help ease the depression as well. If your present situation, well, sucks, denying it will only make things worse. “Some people don’t accept they’re depressed and instead beat themselves up or think they’re crazy or weak,” says Rego.

This may only drive you deeper down, while acceptance can relieve the suffering, he says.

In general, knowing and accepting that you’re depressed can allow you to take steps to make it better or get treatment, rather than pretend that everything’s just fine.

Take a look at the language you use when you think about or talk to yourself and compare it to the way you talk to everyone else. If there’s a disconnect, try to treat yourself in a kinder, gentler way.

“We’re often kind to everybody else but we beat ourselves up. That’s a double standard,” says Blackburn. “It would be preferable to use a single standard: Don’t beat everyone else up, but get off your own back, too.”

Food Colors of Health 6 years ago

What is Deloading and Why Do You Need It? 6 years ago
← 9 Foods that Fight Bad Breath
Delete Yourself From Internet With Just A Single Click →