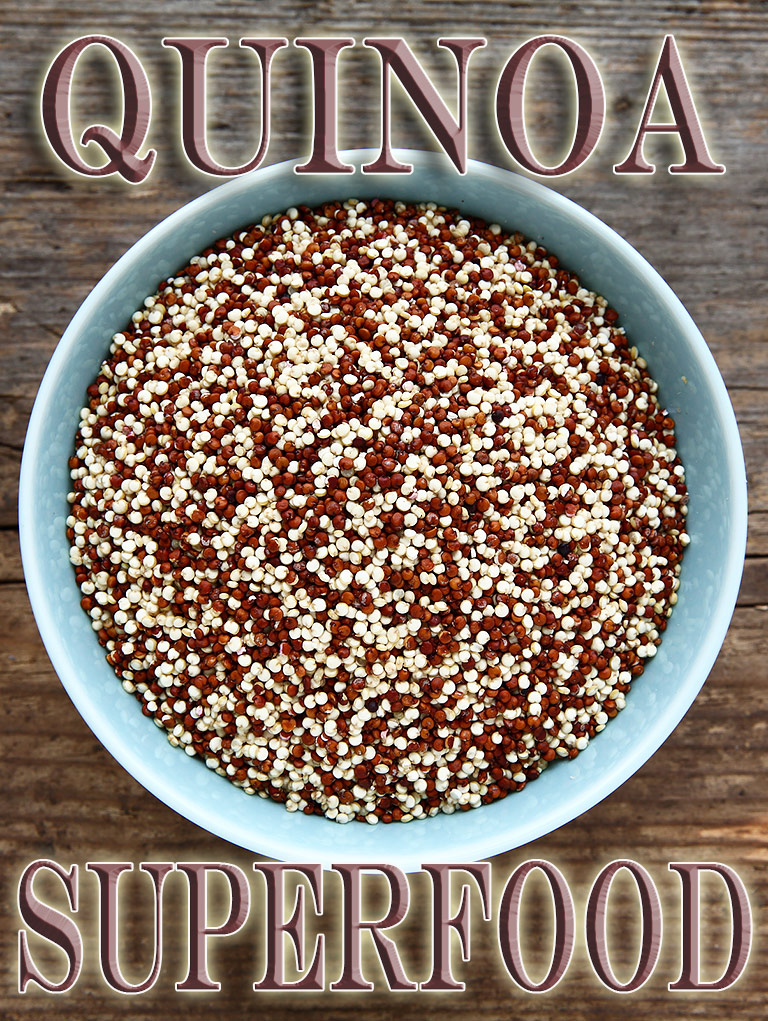 Often referred to as the supergrain, quinoa is high in fiber and high-quality protein. In fact, it contains more protein than any other grain while also packing in iron and potassium. One half cup of quinoa has 14 grams of protein and 6 grams of fiber. This superfood is classified as a whole grain and is naturally gluten-free.

It technically isn’t a cereal grain, but a pseudo-cereal. In other words, it is basically a “seed” which is prepared and eaten similarly to a grain.

It is a tiny grain that cooks up like rice and has a mild, nutty flavor and a light, fluffy texture similar to couscous. You can find it next to other grains in health-food stores and your supermarket.

An introduction to quinoa

Quinoa, pronounced ‘keen-wa’ is a great wheat-free alternative to starchy grains. There are 3 types: red, black and creamy white. All types are slightly bitter when cooked and open up to release little white curls (like a tail) as they soften. Grown in South America (Peru, Chile and Bolivia) for thousands of years, quinoa formed the staple diet of the Incas and their descendants. In recent years, foodies in the UK and the US have heralded it as a superior alternative to bulgur wheat, couscous and rice. Though it often occupies a similar role to these grains in dishes, quinoa is actually in the same family as beets, chard and spinach.

The UN named 2013 ‘International Quinoa Year’ in recognition of the crop’s high nutrient content. With twice the protein content of rice or barley, it is also a very good source of calcium, magnesium and manganese. It also possesses good levels of several B vitamins, vitamin E and dietary fibre.

Cooked quinoa seeds become fluffy and creamy, yet maintains a slight crunch. It has a delicate and subtly nutty flavor, versatile for breakfast (as a cereal), lunch (as a salad) or dinner (as a side).

Quinoa is among the least allergenic of all the grains, making it a fantastic wheat-free choice. Like buckwheat, quinoa has an excellent amino acid profile, as it contains all nine essential amino acids making it a complete-protein source. It is therefore an excellent choice for vegans who may struggle to get enough protein in their diets.

This is the nutrient content in 1 cup (185 grams). This applies to cooked quinoa:

This is coming with a total of 222 calories, with 39 grams of carbs and 4 grams of fat. It also contains a small amount of omega-3 fatty acids.

Quinoa is high in anti-inflammatory phytonutrients, which make it potentially beneficial for human health in the prevention and treatment of disease. Quinoa contains small amounts of the heart healthy omega-3 fatty acids and, in comparison to common cereal grasses has a higher content of monounsaturated fat.

As a complete protein, quinoa contains all nine essential amino acids – including the elusive lysine and isoleucine acids, which most other grains lack. Naturally high in dietary fibre, quinoa is a slowly digested carbohydrate, making it a good low-GI option.

NASA scientists have been looking at it as a suitable crop to be grown in outer space, mostly based on its high nutrient content, ease of use and how easy it is to grow.

How to select & store

Ensure there are no tears or holes in the packet of quinoa you are buying as moisture can affect the freshness of the grain. Store in an airtight container and keep it in a cool, dry place where it can last for several months. When boiling it, the compound that coats the seeds (saponins) creates a foam. These saponins give quinoa a slightly bitter taste. It is best to remove any leftover saponins on the quinoa coat; thoroughly washing the seeds before cooking by putting them into a sieve and running them under cold water. Once you have rinsed it well, it can be cooked like rice. It will expand to several times the original size during cooking.

This Potion Melts The Most Persistent Fat 3 years ago

Why Are There So Many Allergies Now? 4 years ago

Foods To Super Boost Your Energy Every Morning 4 years ago
← How to Grow Ornamental Grass
Hidden Toxins: Most Dangerous Household Chemicals →